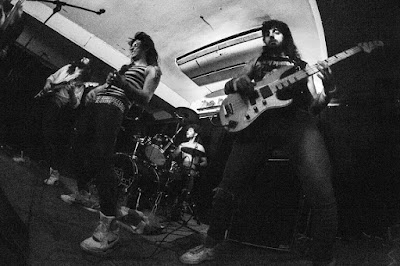 When you’re a fan of classic heavy metal and rock, it’s easy to get stuck in a rut listening solely to old releases from bands you can trust will provide something of good quality. Many will steer clear from newer music in fear of hearing over-produced, regurgitated rubbish. However, on occasion a current heavy metal band comes to your attention and brings some faith back into modern heavy metal. Ruler from Milan are one of these bands. Dedicating their sound to the glory days of heavy metal, it's apparent that the boys worship the likes of Iron Maiden and the NWOBHM, however they still manage to maintain a distinctive note-worthy sound of their own. Perhaps also due to the heavy influences of musical geniuses such as Yngwie Malmsteen and Ritchie Blackmore as well as the best in American and European heavy metal.

I first encountered Ruler in early 2015 when a friend recommended me their 2012 album Evil Nightmares. Hooked instantly, I was happy to see that just a few months later they had a gig planned at one of Camden’s hot spots- The Devonshire Arms. With immediately obvious brilliant musicianship; stage presence; lead solos and a high end vocal range of perfection, I had the feeling that I was watching a band from the early '80s. This was also confirmed by their exemplary choice of cover- Rainbow's 'Spotlight Kid'.

With a recent line-up change and new album under their belt, I decided to speak with the boys to hear what they have in store for the future, and to also find out how Ruler took form.

It was in late 2008 that guitar master Matt Baldoni and then bassist Paolo Pontiggia started their rehearsal room project. They discussed their influences and realised that it was time to bring their vision to life. Through common friends, they came across vocalist Dani Valentini. A singer whose range varies from the bluesy tones of David Coverdale, to the classic style of Bruce Dickinson and with the ability to soar as high as the likes of Stained Class era Rob Halford. After a rehearsal covering the likes of Saxon and Agent Steel, Baldoni knew he’d found 3 out of 4 pieces of his puzzle.


Dani Valentini's unique vocal sound is certainly a key point for discussion. I was keen to know how one comes to realise that they can hit such ball breaking high notes. Dani told me it all began after being alone in the car listening to Mercyful Fate. “Naturally, you sing along, it would be blasphemous to not attempt the high notes. When I realised I could really go that high, like any teenage heavy metal fan, I wanted to be in a band! So, I kept training and practicing!”

With a session drummer who didn’t live up to the standards that the band was already hoping for, they searched for a permanent drummer. The boys agreed that “In Milan there always seems to be loads of guitarists, but not really many drummers or vocalists that really know their music and play with passion.” It was only later that year that they came across Rosario Alcaro. His ability, knowledge and passion was evident from the first rehearsal and so Ruler knew it was now time to begin shaping their dreams.

In May 2011, they played their first gig at The Blue Rose Saloon in Milan. The boys exclaimed:“Oh man it was a great reception, lots of friends turned up to support us and they seemed to be blown away by the alchemy; we felt that the musicianship was so tight! We couldn’t wait for more.” They continued. “Soon after the first show we were overwhelmed by the reception we received from such a small crowd that we knew we had to continue. We bagged our second gig with Girlschool. Probably the hottest, most sweaty gig we’ve ever played but it was a really great achievement for us.”

They then went onto playing their 3rd gig where they caught the eye of production company ‘My Graveyard Productions’. “They offered us a contract and the opportunity to release our first record. We couldn’t believe it!" The album Evil Nightmares was released in April 2012 and quickly did the rounds across the heavy metal underground. 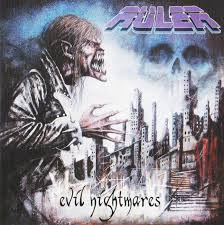 From there on, Ruler were offered the chance to play at some of Europe’s most esteemed underground heavy metal festivals, such as Up the Hammers; Metal Heads Open Air; Heavy Metal Maniacs; Headbangers Open Air and Brofest. They were also able to nab themselves some killer support slots opening up for revered heavy metal bands like Demon, Angelwitch, Raven, Helstar, Ostrogoth, Holocaust, Satan and many more.


In 2013, they released their second full-length album, Rise to Power- which is shielded by some truly phenomenal album cover art to shame even the richest of bands. Listening to this record, you'd be mistaken to think it was a hidden gem from the '80s. The guys had achieved what they felt was a“natural progression” with this album and brought a slightly more melodic, structured style to the table. Valentini’s vocals had clearly matured and he was displaying a more varied approach. The album still of course exhibits those classic Steve Harris bass gallops as well as the unmistakable guitar tone and emotive leads of Mr Baldoni. 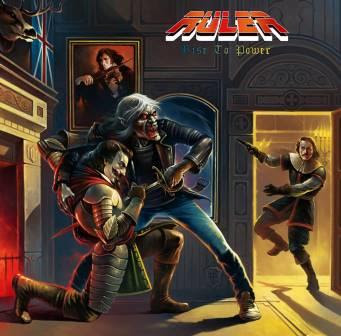 In 2014, Ruler made their way over to Newcastle, UK to showcase their stuff at NWOBHM festival Brofest - a festival that successfully fuses both old and new bands together on one bill. Dani described the festival as “one of the best gigs we’ve ever done- we had such a fantastic response and reception from the crowd as well as other band members. It was amazing to see people banging their heads and singing along to our songs!" Matt completely agreed and stated that: "The response from the audience was incredible and as a musician, playing on that stage for the first time will forever be a pinnacle."


Shortly after this, Ruler went under a huge line- up change with original bassist Paolo’s journey coming to an end. However, in no time at all, the lads were back in business with Mirko Negrino joining the band. Being an Iron Maiden maniac, Mirko was the perfect replacement. Mirko talked to me about his influences and what got him into playing heavy metal: "Mr Steve Harris himself of course. His bass lines are the reason why I started playing bass. In my early years of playing I was greatly influenced by players like David Ellefson and Roger Patterson. Nowadays I’m totally addicted to Geddy Lee and Dave LaRue!"

In 2015, drummer Rosario Alcaro decided to part ways with Ruler, much to his and their sadness. He is however still very much part of the Ruler family and even helped the band recruit new drummer Steve Bianco. Coming with a history of playing both heavy and extreme metal, I asked Steve how he was able to use his experience to bring something more to Ruler's rhythm section. "I guess I'm proud of the fact that I can apply my skills from both sub-genres into my playing with Ruler! When I joined Ruler I was very happy to be playing heavy metal again! I love experimenting with my sound and incorporating the influences of my heroes: Neil Peart, Gene Hoglan, Dave Lombardo and Mikkey Dee... to name but a few!"

Ruler continue to tour and play over Europe and have done so recently in Spain, Belgium, Germany, Switzerland and the UK. They have recently finished recording their upcoming album Prisoners In Hell which showcases the distinctive Ruler sound but with some clear attempts at dabbling in more melodic sub-genres. Valentini's vocals on tracks like 'Queen of Danger' even display some Steve Perry-esque tones. It'll no doubt be a treat to hear how the rest of the album has panned out. I asked the boys what their "little universe" can expect:-

“Fans can expect the usual classic vibe but there has definitely been a great leap in terms of composition, execution and arrangement. We feel there is a more personal, unique approach to this record. Though, we've still maintained our sound  and the influence of bands like Tygers of Pan Tang, Savage Grace, Malmsteen and Blackmore  but this new album really does deliver so much more. We want to come back with a vengeance!” Baldoni added: "I hope our listeners agree that the solos in particular have reached a new personal level and that they be judged without searching for similarities with other guitar players. That's very important to me."


Ruler have indeed enjoyed themselves and they've certainly achieved a good level of success within the underground scene. However, it's really about time that they received the recognition that they deserve. Currently lacking a record label and recovering from a bad experience with an amateur record producer has definitely created a few bumps in the road for Ruler, however, they will not be stopped. With Dani Valentini relocating to London, Ruler are hoping to continue their heavy metal journey in and around Europe.

Here are some of our very favourite Ruler tracks: Mayday, Rise to Power, Mirror of Lies and Queen of Danger.

You can also keep up to date with Ruler's whereabouts here.