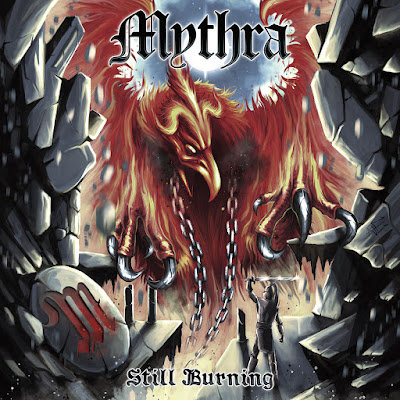 With the emergence of the NWOBHM movement came a flurry of bands from all over the UK, bringing a much-needed surge of energy to hard rock music. The North East's contribution was essential to the development of the genre.

Mythra's influential self-financed 1979 Guardian Records E.P Death and Destiny sold out in a flash and was re-pressed a year later on Street Beat Records. The band enjoyed success with the help of Sounds magazine's Geoff Barton, with 'Death and Destiny' staying in the Alternative Chart for twelve weeks. Despite this, several setbacks including mismanagement led to the band splitting in 1981 before anything else was released.

Over the years, various labels released Mythra's back catalogue and the band themselves self-financed the elusive 2002 album The Darkener with the hope of re-igniting interest. However, it wasn't until their supercharged 2015 Brofest re-union show that they got the spark back and began recording new material. Warriors Of Time: The Anthology followed, collecting together the Death And Destiny era tracks and showcasing five new numbers, 'Reaching Out' proving especially that Mythra were never really finished, just dormant until the right time came.

It was only a matter of time before High Roller Records would snap up the opportunity to release a brand new Mythra album much to the band's delight. Recorded in October 2016, the band worked with produced Bart Gabriel (Gabriel Management), with vocalist Vince High stating “It was a superb experience and we all had a great time working with him”.

Fans got a taster of the new album at Brofest #5 earlier this year, and the general consensus was that Mythra had done what few reformed NWOBHM bands do these days; creating a sound that is true to their past but in no way dated. The album's namesake opens with a heavy chugging riff backed by a powerful rhythm section; High's still-youthful vocals layer smoothly over the top. This updated heavy metal sound (sometimes with a hint of thrashiness in style) continues throughout with nods to the old school in the guitar playing and tone.

'Sands Of Time' allows High to exhibit his vocal range over a mellow guitar intro before pounding into a powerful classic heavy metal track with superb guitar playing. Other highlights from Still Burning include 'A Call To All' and 'That Special Feeling', both instant classics capturing the NWOBHM sound that we all love with an updated twist.

Still Burning is very much a comeback and a half, keeping the heavy metal flame alight.  It definitely won't disappoint fans. You can order the album directly at High Roller Records from April 28th.