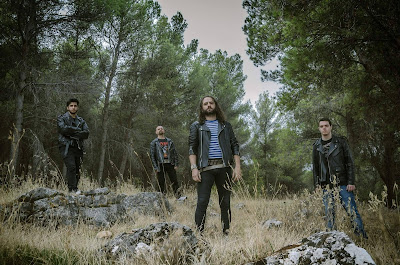 In December 2016, the heavy metal world was given an early Christmas present in the form of Witchtower’s Hammer of Witches. 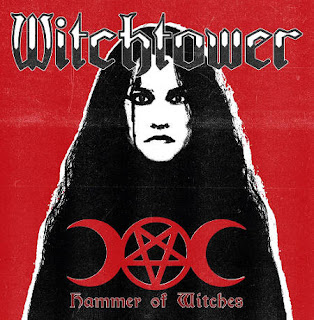 Following a 2014 EP release and their debut, self-titled full length a year later, there was some excitement building about this next output. The anticipation was certainly justified. Witchtower is a solid album but Hammer of Witches takes the band to a whole new level. Both the song writing and execution sound tighter without losing any of the authentic “old school” sound that they do so well.

'Salem Witch Trials' starts the album off with blasting, high energy riffs demanding attention from the get go. A frantic solo gets my blood pumping and I'm hooked already. 'Fast Broomsticks' allows the band to showcase that their influences are absolutely not restricted to the NWOBHM. The guitar work is so catchy alongside the chugging bass and drums. With vocals somewhat reminiscent of those of Blue Öyster Cult, the track is a fantastic tribute to the music of the late seventies with the band's own signature firmly stamped across it.

Things get pretty interesting over the next couple of songs. This album is in no way predictable and each song produces a new mood and a different set of influences. The atmospheric opening of 'Spiritual Love' leads into an uplifting and emotional power ballad. Vocalist Víctor's accent really comes through on this track, fitting perfectly with the music and adding another dimension to the album. The harsher 'November of 1786' takes things in a completely different and darker direction but not without a small tribute to Judas Priest thrown in. 'Black Cauldron' is fast, brutal and raw with a surprisingly groovy and progressive instrumental mid-section.

The slow start to ‘Darkest Hour’ is soon remedied by a bouncy and memorable song full of catchy melodies with some doom tinged bass lines and melancholic guitar parts somehow seamlessly blended in. Far from being discordant, it works really well. Witchtower then leave us with a progressive, instrumental outro - tipping their hats to prog rock’s finest.

In a scene brimming with new acts firmly rooted in the sounds of the mid-eighties, Hammer of Witches gives us something else, clearly influenced by the bands which preceded the eighties heavy metal scene. A late seventies vibe mixed effortlessly with the NWOBHM inspired material. This album feels a bit like going on a journey with each track bringing the listener down different roads, all leading to the same destination. It’s engaging from beginning to end and genuinely interesting to listen to.

Witchtower have gathered a loyal fan base in their native Spain, affectionately referred to as “friends” by band leader Víctor de la Chica. They’ve caught the attention of many of us beyond the Spanish borders in the past few years but more and more heads are sure to start turning in their direction thanks to Hammer of Witches. The album has just been released on black, red and purple coloured vinyl by Unsilent Tombs Records, so grab it while you can!

With their main goal being to continue creating and playing music, Born Again- Heavy Metal Soundhouse can’t wait for the next chance to catch Witchtower live. Having so much enjoyed playing Brofest 2014 and after receiving such a great reception from fellow bands and fans alike, let’s hope for a return to the UK in the not so distant future.