Louise of Born Again meets with Rob Davis of Ashbury at Keep It True XX to talk about the best fans in the world, their place in the heavy metal scene and everything we can expect from Ashbury in the coming years, including info on their upcoming album.

Rob: It is incredible. And even more incredible is, people sometimes say “what is the best part of all of this?”, the best part is when you get on stage and there's 300 or 3000 people or whatever, singing the lyrics of your songs with you, that for me is as good as it gets. That means that I did something that means something to someone, and it's going to last. That's priceless, that's something that you can wish for. You can't buy it, you can't make it happen, it has to happen naturally. That's the best part. Just knowing that I wrote something, like, last night at the pre-party, somebody came up and his words were “You changed my life, Endless Skies changed my life”. I don't know how to react or answer things like that, other than it makes your heart feel so good because you know whatever they are saying, or whatever they mean by that is a good thing, it's not a bad thing. 99 % of me doesn't believe I deserve it, but being part of that is really special.


Asbury review: Keep It True Festival (20th Anniversary)
Two years after their first appearance at the prestigious 'Keep It True' festival, Ashbury have been invited back to grace classic rock and heavy metal fans with their presence once again. 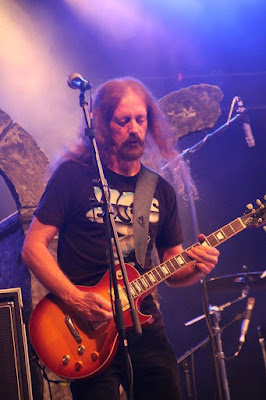 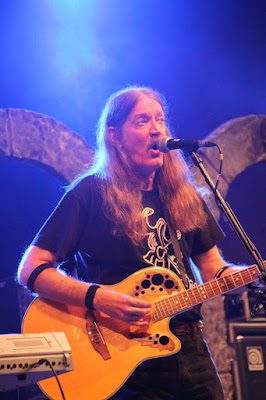 It was back in 2008 when I first heard Endless Skies. I remember the album really making an impression on me and I desperately tried to find the a vinyl copy, with no success. Luckily it's the days of the Internet so I was able to listen to the album online as much as I wanted.

Circumstances over the years meant that I was unable to catch any of Ashbury's previous European dates, so I resolved that I wasn't going to miss them again this year.

It's been a full on weekend so far in Lauda-Königshofen, but as soon as the crowd for Leather Leone begins to disperse, I'm darting through it to secure a spot at the front barrier as I don't want to miss anything. This was good thinking on my behalf because no sooner do I get a good position, than the influx of Ashbury fans arrive behind me.

Ashbury was formed in 1980, and Rob and Randy Davis have remained active as musicians over the years, regularly playing acoustic shows as Davis Brothers Ashbury. But it was their 1983 debut album, Endless Skies, that gave them a platform to reach a wider audience, first released on vinyl and then on CD, all achieved without having been signed by a label. Luckily for us fans, long gone are the days when you had to keep an eye out and fork out over £100 (British pounds) for an original vinyl copy; High Roller Records re-released a couple of (now sold out) batches of this record, with a 3rd pressing due out in July this year.

Humble as anything Rob and Randy walk out onto the stage grinning from ear to ear. Joining them are John Bujak (third guitar), Joey Moreno (bass) and John Gimmler (drums). The crowd is ecstatic for this much loved gem of a band, and this is evident as soon as the familiar intro to the 'The Warning' sounds through the hall. Everybody is singing along with Rob, and I myself am in a surreal daze, witnessing effortless guitar playing; all three guitars are in perfect timing with each other, with Randy nailing each and every intricate melody.

Ashbury come as a much needed break during the day from the hard and high energy sounds of heavy metal; a moment to bask in epic hard rock tinged with folk and progressive influences. John Bujak slots right in with the band, having moments to allow his own playing to shine whilst being respectful to the original songwriters Rob and Randy. All three guitarists are backed by a strong rhythm section.

'Take Your Love Away' follows before the soothing acoustic and soft electric intro to 'Hard Fight' delicately resonates around us with Randy singing, backed by the crowd. The brothers have a special partnership bonded by a passion for creativity and a love for music.

We are treated to more of our favourites from Endless Skies, including 'Mystery Man', 'Madman' and the title track 'Endless Skies'. All astonishingly well constructed songs with a mix of acoustic and electric guitars and vocal harmonies. In fact, I have no qualms saying that the whole album is magnificent, there is nothing you can fault. The album comes alive.

Ashbury's 2004 release Something Funny Going On is not neglected during the set with the upbeat 'The Cold Light Of Day', an album that was released 21 years later, collecting together material that was written during that time.

The crowd waits in anticipation as Rob announces that they have been working on new Ashbury material set for release in the late summer/ early fall. Titled Eye Of The Stygian Witches, they debut the track 'Good Guitar'. During Born Again's interview with Rob the previous day, I remember that he described it as a “Straight-forward rocker”. Any doubts that they could match their previous material vanishes immediately, and Rob was right, it is a classic rocker with that very distinctive Ashbury edge. They follow this immediately with 'Faceless Waters', and we are left in total awe at their ability to effortlessly create such excellent songs.

'Vengeance' ends the set, rivalling the heaviness of any of the 'heavy metal' bands on the bill.  It's been a sobering moment during the day, to be able to witness such a special band which has transcended musical genres.

Stay up-to-date with Ashbury news here, and for those who haven't heard their discography, please please do have a listen, you wont regret it!