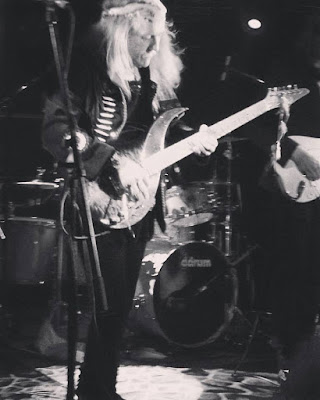 Walking down the steps of The Camden Underworld, I think back to the last time I saw ex-Scorpions' guitar god Uli Jon Roth play at the now deceased Purple Turtle in Camden- there couldn't have been more than 20 people there! This time around, I am anxious to see whether or not Uli Jon Roth would receive the turn out he deserves, especially what with playing a very esteemed but cozy venue and treating his fans to a set list including songs from the brilliant Tokyo Tapes Revisited.

As I enter, I am happy to see that a sea of London music fans are eagerly anticipating the arrival of Uli and for what I am expecting to be one of the best performances of 2017.

My first position is stood in front of a man and his tripod and so I move a little closer, next to the annoyingly placed pillar and in good sight of both Uli and his band, made up of a keyboardist, drummer, bassist and 2 additional guitarist- all who seem to fit the bill perfectly.

As Uli enters, he is greeted by a lively and excitable applause to which he looks very pleased. Uli has a natural mystifying aura which seems to warm the room up rapidly, as he somehow creates both an upbeat and solemn atmosphere, all at the same time. As his guitarist strikes the first chord to the opening track 'All Night Long', Uli shortly joins in with his distinctive lead guitar and the crowd are already bouncing along enthusiastically as guitarist and vocalist Niklas Turnman does a fantastic job on vocals. He shows off his own natural style but also with a slight touch of Scorpions' vocalist Klaus Meine in there too, to keep things familiar.

After a melodically beautiful (and very loud!) execution of 'Longing For Fire' from Scorpions' 1975 album In Trance, Uli informs us that he is about to welcome a very special guest on stage. Although a friend and I joke that it would be Klaus Meine coming out to join, we both had a feeling that it would be Inglorious singer and 'The Voice' contestant Nathan James- and indeed we are right. As the music starts up to one of the best tracks for really getting a crowd going and with one of the catchiest rock riffs ever written - 'Sails of Charon' gets feet stamping and air guitarists riffing. Despite some very questionable dancing from Nathan, he does a great job and it's clear that he and Uli share an on stage connection.

Although there is no denying that Nathan James has an exceptional vocal range, guitarist Niklas Turnman delivers a more honest and fitting style for Uli's classic '70s heavy sound. However, once again Nathan joins us on stage for 'In Trance' (after accidentally coming on stage for 'We'll Burn the Sky'). This time around, it seems that Nathan needs quite a lot of direction from Uli, both lyrically and with the song structure. Perhaps though, this is just down to the little rehearsal time they've had what with Uli being such a busy man.

By the time Uli has reached the masterpiece 'Fly to the Rainbow', it seems as if his music muscle memory has taken complete control of him. He plays with such ease and ability that the music just flows naturally around the room as if he is sporting many arms. The crowd are silently still as they soak up the serene sounds, and even the rest of his band are transfixed as they stare in awe, almost without blinking. Uli continues to make his way through an absolutely perfect set list playing some seriously brilliant Scorpions gems including  'Dark Lady', 'Pictured Life', 'Sun In My Hand' and even 'Catch Your Train' from the masterpiece that is Virgin Killer.

Uli disappointingly informs the crowd that he was unaware of the early curfew and so he'd have to wrap things up shortly. However, the disappointed feeling soon diminishes because Uli is now opening up with the softly played lead to one of my all time favourite tracks, 'Yellow Raven'. The hypnotic rendition makes the hairs on my arms stand up on and end and also provides ample opportunity for a soulful sing-a-long. Uli's band really do support him perfectly and their skill is showcased during this and many other tracks.

As the set comes to an end, Uli plays homage to his inspiration Jimi Hendrix with 2 tracks which are no strangers to an UJR setlist- 'All Along the Watchtower' and 'Little Wing'.

Watching Uli is a truly cosmic experience. In fact, finding an adjective to justify how truly brilliant an Uli Jon Roth show really is, is somewhat difficult. To really capture the mystification, one must experience it for themselves. So, ensure you're keeping your eyes peeled for any Uli Jon Roth gig announcements near you. Scorpions fan or not, you won't regret dedicating your time to this genius maestro.