Rock Goddess 'It's More Than Rock And Roll' EP Out Now!

34 years after their debut self titled album, the original line up of the NWOBHM band are back with a vengeance, giving us a taster of what's to come with a 3 track EP. 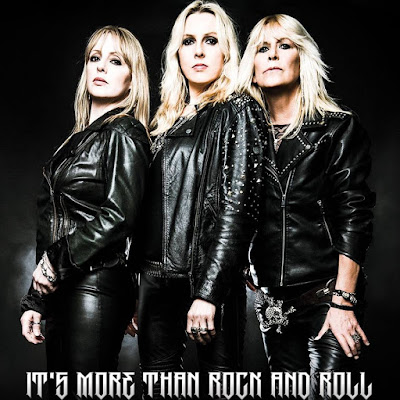 With Classic Rock's Malcolm Dome describing the three track EP as "A complete affirmation that they (Rock Goddess) are fully relevant to the hard rock scene in 2017”, fans won't be disappointed when they get their hands on a copy of the new material, due for release today.

Since their reformation a few years ago, sisters Jody and Julie Turner along with fellow original member Tracey Lamb have been gigging across the UK and Europe. Although they've mainly played material from their classic self-titled 1983 album and follow up, Hell Hath No Fury, we've heard the odd new song make an appearance during live performances since 2015, giving fans a glimmer of hope for an imminent release of a new record. As always, all good things come to those who wait. And now it's here!

The EP, entitled It's More Than Rock And Roll, has already seen the track, 'Back Off', given the live treatment, feeding the hunger of Rock Goddess gig attendees for new music. The rough and tough heavy metal with the distinctive vocals of Jody left fans in awe with an appetite for more.

The title track is a perfect opener to this long awaited release, encapsulating what music means to them and us. The first sign of those familiar vocal harmonies is bound to make listeners go weak at the knees.  'We're All Metal' is a fun track with a chorus that nods to the old school in style and feel.


Jody Turner and Tracey Lamb tell us about the musical process and how it feels for new Rock Goddess music to be out:

Born Again: Jody, you were adamant that it would be the original line-up of Rock Goddess to reform in 2013 and record again. How has it been for you, working together after the years apart?

Jody: Well we reformed quite a long time ago now, seems like we have never been apart! It was a very moving experience when we first got together. We played our first notes together as kids, that's pretty special, and that's the glue that holds us together, bonds that strong are unbreakable.

Tracey: When we first got together and rehearsed it felt weird but wonderful.
Now it feels like we've had no time apart. I feel we have the same energy, power and chemistry that we had back when we started.

Born Again: The new Rock Goddess EP is due for release later this month. What kind of feelings are running through your head, now that new music is finally going out there to the fans?

Tracey: I feel both delighted and very excited. It's been 4 years since our reformation and over 30 since we released any product. It feels more exciting this time around. Our supporters have been so patient.

Jody: A lot of feelings but excitement and anticipation are the main two. Little bit of trepidation as well, hoping people like it. That's always scary.

Born Again: Could you give us a brief outline of what was involved in the recording process? As in, where, when, with whom and for how long?

Jody: We recorded in Alaska Studios in London with engineer Santiago Morales and finished recording 2nd week in March. I produced the 3 tracks and then it was mixed and mastered by Wes Maebe after that. It was a cool process, there was a lot of excitement in the studio as the tracks developed. When we wrapped we celebrated with quite a lot of fizz!

Born Again: You've played various festivals, introducing newer tracks in your setlist. What has the general response been from your fans?

Jody: They are amazing. They are so supportive and encouraging. We love them all so much, they’re very special.

Tracey: The response has been overwhelming. We always observe what songs go down better than others. The crowd have always responded with excitement to new and old songs.


Born Again: Now that the Ep is available, naturally people will want to know when we can hear a full length album from Rock Goddess?

Jody: As you can imagine its been pretty hectic recently, but now we are planning the album, so watch this space ....

Order a CD copy of It's More Than Rock And Roll at: http://rockgoddess.bigcartel.com

Make sure you get a ticket to the Rock Goddess EP show at the Borderline on June 23rd!