After hearing the remasters Vardis frontman, Steve Zodiac, gave the go-ahead  for the re-release of their first three albums. 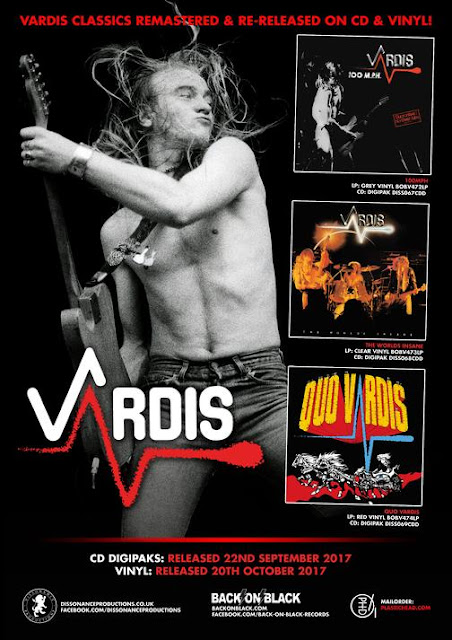 Drawing on influences from '50s-'60s rock and roll, '70s glam and hard rock, Vardis were formed in Wakefield, North England, and soon set the New Wave Of British Heavy Metal scene alight with their high energy, hard rock songs; all tinged with blues and glam rock undertones. The end product being heavy metal that you can boogie and swing your hair to!

With a thumbs-up from from Zodiac, it's full speed ahead for the re-release of the first three Vardis albums, starting with their 1980 debut 100 M.P.H., a self-funded live album which tantalizes music lovers with the bold statement 'Guaranteed No Over Dubs' on the cover. The follow up albums 'The Worlds Gone Crazy' ('81) and 'Quo Vardis' ('82) also display the same boogie rock vibe.

Steve Zodiac says of the re-releases; “It’s a thrill to finally hear these records as I remember them sounding in the studio. Dissonance Productions and Back On Black Records have done a fantastic job and produced the definitive editions of these albums.”

Head over to Plastic Head Music Distro to pre order CD or Vinyl versions of these albums.