This years Stone Free Festival is fast approaching, with a fantastic line up of bands set to take over London's O2.  With access to rock shows, vinyl stalls, a beer garden and loads more, it's going to be unmissable. 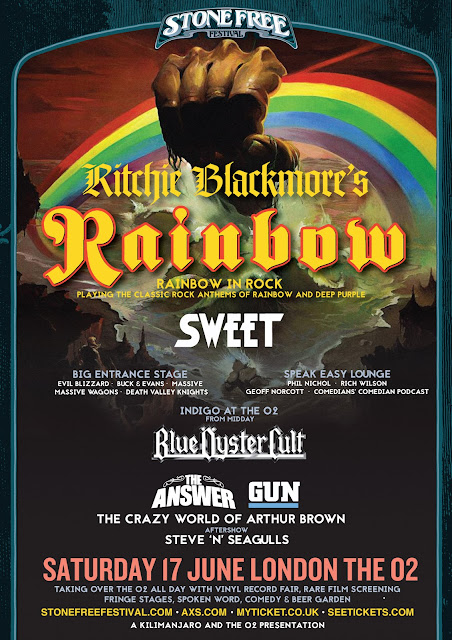 After last years hugely successful Stone Free Festival, the all-day bash is back again boasting a line-up of rock royalty. Headlining the fest is Ritchie Blackmore's Rainbow, who have chosen to perform at Stone Free as part of an exclusive mini UK arena tour. This comes after their three sell out shows last year, which were a joy to fans after Ritchie's long break from playing hard rock music. This tour also follows the first two recently released singles in twenty two years; 'Land Of Hope And Glory' and the re-recorded 'I surrender' with new vocalist Ronnie Romero on vocals. Also coinciding with this four date UK tour is the release of Live In Birmingham 2016 by Eagle Rock Entertainment today, Friday 9th June. Fans will get to experience the magic of legendary Deep Purple and Rainbow songs such as 'Soldier of Fortune', 'Mistreated', 'Child In Time', 'Man On The Silver Mountain', 'Stargazer' and more.

Performing on the arena stage before Ritchie Blackmore's Rainbow is the version of Sweet that was reformed by the original guitarist Andy Scott. Seeing as they will be joining Rainbow in a supporting slot in Birmingham later on in June, it's no surprise that they have been enlisted for this coveted spot at the O2. Formed in the 70s, the glam rock band were hugely popular throughout the decade. Starting out as more of 'bubblegum pop' style band, they also explored their musical interests, putting out tracks on the B-sides of their singles which had more of a hard rock edge to them. For example, 'Ballroom Blitz' was split with 'Rock And Roll Disgrace', 'Hellraiser' with 'Burning' and 'Little Willy' with 'Man From Mecca'. The two quite different sides of the band is why they appeal to the masses.

With the arena not opening until 6 pm, the organisers of Stone Free have organised a whole day's worth of entertainment, including two other music stages; Indigo at the O2 and the Orange Amps Stage.  New York's Blue Ӧyster Cult are set to headline at the Indigo, sharing the stage with The Answer, Gun, The Crazy World Of Arthur Brown and Bang Bang Romeo. Evil Blizzard will be headlining the Orange Amp Stage, situated near the main entrance.

It's not all about music though, the second floor All Bar One will host the Speakeasy Lounge, providing a range of comedy and spoken word. Amongst the lineup will feature Ray Foulk, one of the promotors of the brilliant Isle of White Festival from '68-'70 telling stories from his experiences.

Punters will be able to do a bit of record shopping at the vinyl market stall, brought to Stone Free by VIP Records Fair. No festival would be complete without a beer garden, which will be easily accessible to all festival goers.


The classic 1973 horror film The Wicker Man, featuring Christopher Lee will be shown in Cineworld at the O2 from 1 pm.

More information about the acts shown on the timetable below can be found on the official Stone Free website. 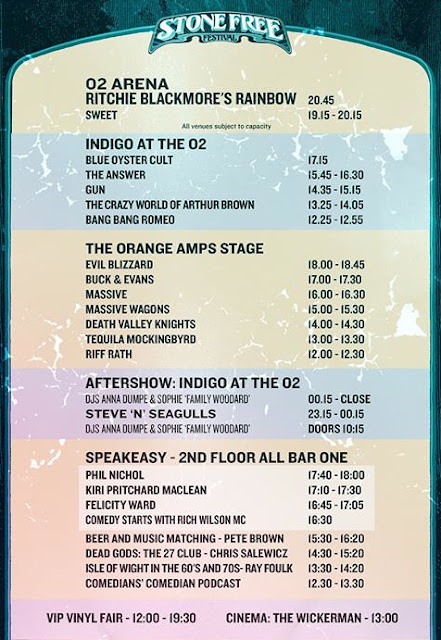 Get your tickets here: www.stonefreefestival.com/tickets