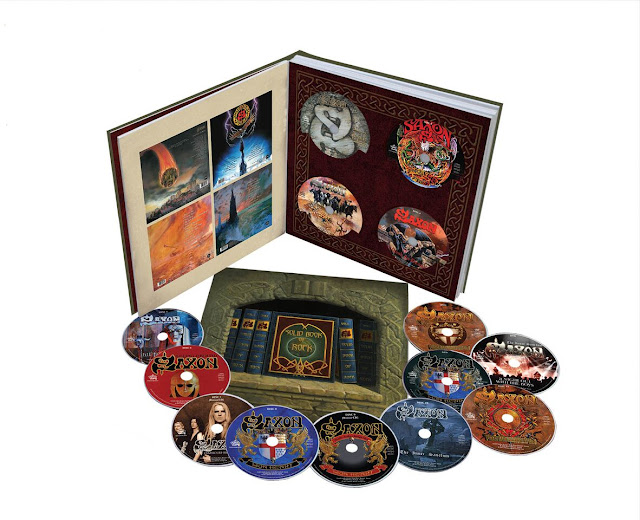 Fans of Saxon’s later output are in for a treat in the form of The Solid Book Of Rock. Released on 4th August, the fourteen discs in the set include all nine of Saxon’s studio albums released between 1991 and 2009 as well as a sizeable chunk of bonus material. The Classics Re-Recorded disc, originally issued with the initial pressings of Killing Ground, and a rough studio mix of Lionheart originally issued on the 2006 limited edition are included as two bonus CDs. Those looking for some visual stimulation need not be disappointed. Three limited edition DVDs, originally released with Lionheart, The Inner Sanctum and Into The Labyrinth are included in the 24 page booklet. Presented in the form of a book, the set is packed full of lyrics, credits and photos for each album.

With fifteen previous Saxon covers under his belt, artist Paul R. Gregory has yet again been given the Saxon seal of approval with Biff stating, “It's worth getting just for the art work. A great piece of Saxon history".

For fans wanting something just that little bit more special, an exclusive limited-edition of 'The Solid Book Of Rock', containing a print signed by Biff Byford himself, will also be available from Amazon.

Pre-order your copy of the standard or exclusive version from Amazon now.