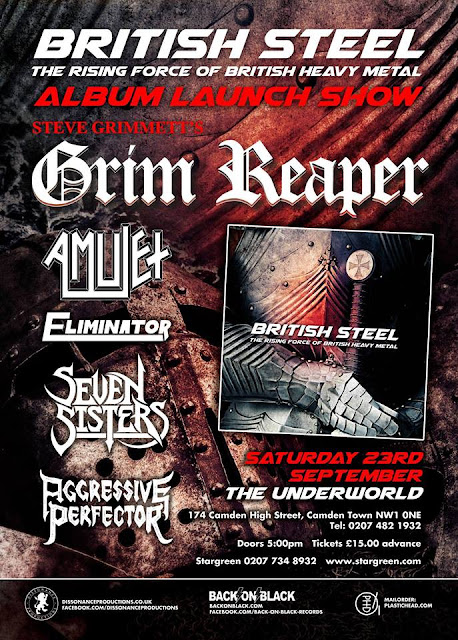 We all know the bands that pioneered heavy metal in the '70s and '80s; we've searched high and low, delving deep into the murky underground to discover shining vinyl gems. Thankfully, long gone are the days when we'd have to part ways with a small fortune just to have a copy of a classic cut. Labels like High Roller Records have been re-releasing records that we could only have dreamed of owning in the past.  However, they are not the only ones in the game now; there's a new kid in town, Dissonance Productions. Born out of a love of quality vintage heavy metal and hard rock in April 2016, co-founders Tom Doherty (ex Motörhead management) and Steve Beatty (Plastic Head) went on to christen the new label with the re-release of Venom's first four records.

Over the past few years there has been a rumbling in the scene; an emergence of young British bands ready and willing to fill the gap left by these heavy metal heroes. With hard rock and NWOBHM influences running through their veins, they've garnered a following, organically grown from hard graft, blood, sweat and tears. These guys have put everything into their music from organising their own gigs in their (proverbial) back yards to touring nationally and internationally. Of course, it was only a matter of time before Dissonance Productions was going to take an interest and sign bands such as Eliminator and Seven Sisters amongst seasoned acts such as Salem and Grim Reaper. The signing of these younger bands has culminated in the curation of British Steel- The Rising Force Of British Heavy Metal; a collection of tracks from bands around the UK, curated with the help of Live Evil's Marek Steven.

Those seeking a hit of this fresh British heavy metal had better get themselves to London on the weekend of September 22nd in time to celebrate the release of the compilation. The main event on Saturday, finds the legends that are Grim Reaper, headlining The Underworld in Camden, with support from Amulet, Seven Sisters and Eliminator.