What's coming up in November and December?

It's the last couple of months of 2017, but we not ready to slow down yet, if ever! If you thought you'd be able to give your liver rest or your ears a breather, you thought wrong. There's a delicious number of gigs coming up to keep even the fastidious music fan on their toes. We hi-light the shows you definitely cannot miss! 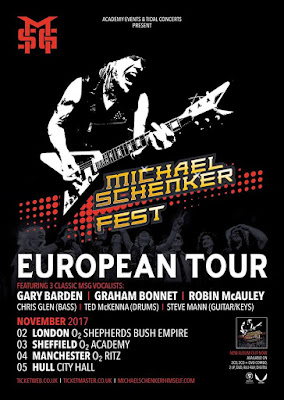 November kicks off with the return of German musical maestro, Michael Schenker. The M.S.G returns to the UK with a four date tour under the title of 'Michael Schenker Fest'. Fans of the guitar aficionado are especially pleased that the gigs will feature original vocalists Gary Garden, Graham Bonnet and Robin McAuley. See you at the front!

After the success of their EP launch show back in June, South London's favourite queens of metal are back, ready to make us boogie to some heavy metal and rock 'n' roll. Supporting Lynch Mob, the girls will very much own the room as they have built up a 'mob' of their own; a loyal army of Rock Goddess fans. 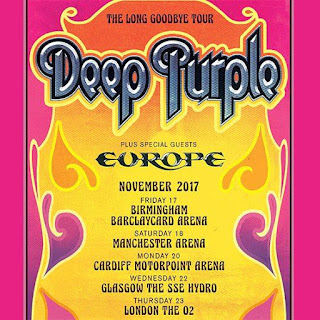 Starting in Bucharest, Romania, the Deep Purple steam train has been rolling it's way across countries and continents, enchanting fans with their wide catalogue of music.  It's going to be a sad affair as we say goodbye to some of our favourite musicians, but at least they will go out in style.

Original drummer of Ireland's finest, Thin Lizzy, Brian Downey has been making a few waves across the Irish Sea with his new project Brian Downey's Alive and Dangerous. Forty years since the recording of one of the greatest live albums to ever grace the world of rock n' roll, London will be treated to a special Live and Dangerous anniversary show. Last year's Xmas Rocka was such a huge success that the folks at Hard Rock Hell HQ decided to treat us maniacs with a second year of old school British heavy metal.  Get kitted up in your denim and leather and bang your head bands like Raven, Diamond Head, Lionheart and Traitors Gate, amongst other.

Sadly, this will be the last Mearfest, but it will most certainly go out with a bang.  With the initial aim to raise money for various cancer charities, and later, 'The Willow Support Group in Berkshire' (stillbirth charity), they've always pulled together a line up of top NWOBHM.  Fans have come far and wide in the past and there is no doubt that they will do so for this edition of Mearfest.  Catch classic NWOBHM bands such as Scarab, Satan's Empire and Handsome Beasts as well as newer acts such as Kaine and Toledo Steel.

Ourselves at Born Again have been resurrecting the 'Heavy Metal Soundhouse' since 2015, putting on club nights and after parties as well as Djing after parties/ support slots for bands and festivals. Imagine how delighted we were when we found out that the legendary DJ, Neal Kay, had already heard of us when we contacted him. So, we coaxed Neal out of vinyl spinning retirement, and together we're putting on the party of all parties, a one off 'Heavy Metal Soundhouse' to end 2017 on a high. This will also double as the official after party to Orange Goblin's Christmas gig in The Electric Ballroom, Camden.