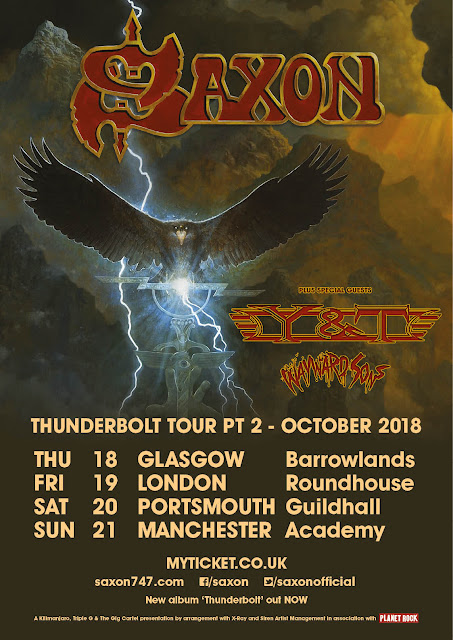 SAXON aren’t wasting any time in 2018! Following the critically acclaimed release of Battering Ram in 2015, the heavy metal giants have released their 22nd studio album ‘Thunderbolt’ via the Militia Guard label (Silver Lining Music) which reached the Top 30 in the official UK charts this February. Now they have announced Part 2 of the Thunderbolt Tour, with Part 1 selling out, SAXON will bring their iconic live show to more cities across the UK. This time, SAXON will be joined by special guests Y&T and Wayward Sons.

Biff Byford  “We’re gonna be bringing the tour back into the UK and Europe in the Autumn, playing some classic venues with some classic bands….it’s going to be special – BRING IT ON!”

Don't miss out this time! Get your tickets here.
Posted by Born Again- Heavy Metal Soundhouse at 09:42