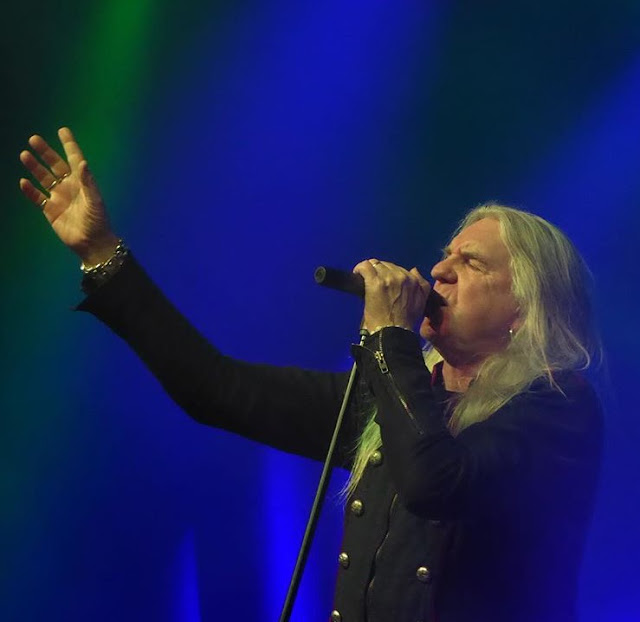 Welcomed into picturesque Cambridge with blustery winds and a biting chill means we immediately take refuge in the closest Wetherspoons which we soon realise is just a stones throw from the infamous Cambridge Corn Exchange. Beer in hand and surrounded by a mix of both Rugby enthusiasts and heavy metal loyalists - we're now very much looking forward to the doors opening for Saxon, Diamond Head and Rock Goddess.

Full of liquid calories, we're lit with adrenalin as we make our way towards the grand venue. The queue is long and so we have to make do with listening to the very brilliant Tracey Lamb, Julie and Jody Turner take to the stage from just outside the main doors. It's not long before we're inside taking off mountains of layers as we climb into a packed venue. It's great to see so many fans here bright and early supporting Rock Goddess as they crack on with the first tracks of their set. The somewhat solemn crowd bob and clap along to 'Satisfied Then Crucified', 'Two Wrongs Don't Make a Right' and 'Back Off'. The girls never fail to emit pure power and energy and it's not long before Jody has the crowd warmed up and finally moving as they join her in singing along to 'Heavy Metal Rock 'n' Roll'. Whether you're familiar with the girls' back catalogue or not, the catchy chorus gets bodies moving and the high energy, ballsy performance is clearly appreciated. The last time we caught Jody, Julie and Tracey live was at London's Borderline in 2017 where we were lucky enough to open the show for them. They blew the roof off the much smaller venue and tonight, albeit in a much larger venue, their performance had just the same effect. The perfect opener. 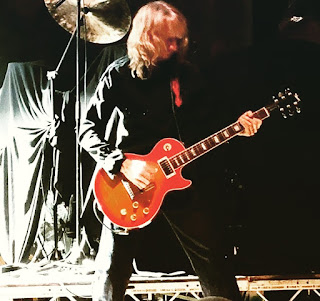 It's time for NWOBHM royalty Mr Brian Tatler of Diamond Head to prepare his axe as he enters the stage with vocalist Rasmus Bom Anderson by his side. The smell of burning gets some raised eyebrows but is soon forgotten as the band immediately rip into Lightening to the Nations' classic 'Helpless'. Although we crave some volume, there's no surprise that opening with this number is always going to go down a storm with Diamond Head fans. Frontman Rasmus is a brilliant performer as he raises his mic in the air, Coverdale style. Although Tatler is the only  original member of the band, Rasmus' stage presence demands all eyes on him. They work their way through a killer (albeit very short) set of classic numbers such as 'Heat of the Night' and 'It's Electric' with only one newer track 'Bones' from the 2016 self-titled album. Diamond Head's set absolutely flies by as one of the most well-known heavy metal riffs of all time vibrates across the room. 'Am I Evil?' sets in and the crowd finally come alive- something they should have done several tracks ago. 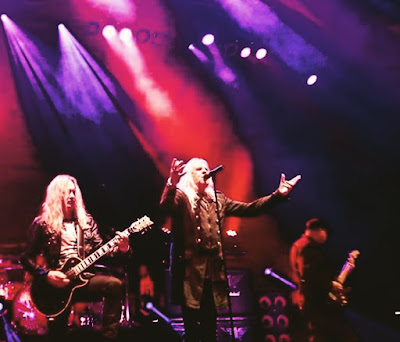 As soon as the last applause is made I rush my way through to the bar and loos, eager to make my way back to the front for Saxon. However, I'd clearly missed the loud, piercing fire alarm sounding across the venue as a steward taps me on the shoulder and asks me (and the rest of the venue) to vacate the building. The streets of Cambridge are packed full of shivering Saxon fans, all
eager to get back inside but many definitely wondering what had caused the alarms to sound. Many around us continue to speculate as some people even go back to nearby hotels never to return. However, after a pint and a pee in a nearby bar, it wasn't long until we were all welcomed back into the Cambridge Corn Exchange only to find out that the sirens were merely that of a defective alarm.

The only alarm heard now though are the pipes of Biff Byford as he pounds on stage in his usual all-black attire kicking-off with new track 'Thunderbolt' swiftly followed by 'Sacrifice' and 'Nosferatu'. Biff jokes with the crowd about having to leave the Cambridge Corn Exchange due to a false alarm for the 2nd time in his heavy metal career but praises the venue for being such an iconic setting.
The setlist sees a mixture of tracks old and new with the newer tracks going down well with a now buzzing crowd.The vibe in the room is familiar and content and this is only heightened as Saxon pay respects to Motorhead with 'They Played Rock 'n' Roll'. A rapid yet emotive performance. 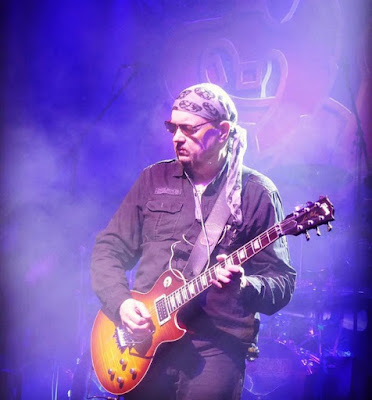 The sing-along, head-banging and fist-pumping actions are now fully underway with beer glasses galore floating through the air to celebrate first-rate Saxon material 'And the Bands Played On', 'Crusader' and 'Princess of the Night'.

Any concerns of Saxon's set being cut short due to the alarm were long gone as they treat us with an encore and any Saxon enthusiast could guess what this will include. It's time of course for 'Heavy Metal Thunder', 'Denim and Leather' and 'Wheels of Steel'. Unlike many generic numbers from classic heavy metal bands, these tracks are never tiresome to hear and certainly never fail to keep you moving - rest-assured sweat levels increase rapidly!

It didn't matter that we'd lost our prime spot at the front, nor did it matter that I was under a 7ft man's armpit. Saxon are one of those bands that you could end up seeing several times a year, but they always put on a jam packed, energised performance which leaves no attendee disappointed. True heavy metal heroes who seem as if they'll continue forever... let's hope so!