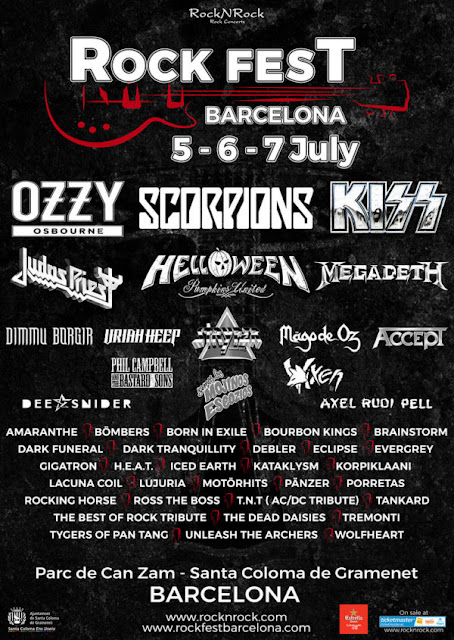 Trapped in this cold and grey springtime in London, we can’t be blamed for our minds being firmly planted on thoughts of July in Barcelona: sunshine, cocktails, sand, sea and heavy metal.

For the fifth time, masses will descend into the heat of summertime Spain to be treated to some of the greatest hard rock and heavy metal acts on offer. In the short time it’s been running, the festival has climbed to a level which rivals the most well established events on the summer circuit.

There’s no shortage of big names with Ozzy Osbourne, Scorpions and Kiss taking the headline slots on the Thursday, Friday and Saturday. There’s enough showmanship in those three bands alone to make this a weekend to remember but it doesn’t stop there. On the back of the release of the widely acclaimed Firepower, Judas Priest will be stopping off in Barcelona after a series of dates across the US, Canada, Mexico and elsewhere in Europe. Another big treat is coming to the festival in the form of Helloween and their ‘Pumpkins United’ tour. Original members Michael Kiske and Kai Hansen have joined forces with the current band line-up to deliver a set list and show which is absolutely unmissable for super-fans and casual listeners alike. Megadeth will also be visiting Barcelona as part of their run of summer festival dates, with both original members Dave Mustaine and David Ellefson now making up half of the foursome.

There’s plenty on offer for those of us who are firmly stuck in a pre-90s state of mind with appearances from Uriah Heep, Stryper, Vixen, Axel Rudi Pell, Tankard and Accept all on the cards and Tygers Of Pan Tang bringing some much needed NWOBHM to the mix. With Twisted Sister having come out to play for the final time in 2016, fans mourning the loss of one of the greatest shows in heavy metal history will be excited to witness the return of the sheer force that is Dee Snider with his solo band.

Another highlight slightly lower down on the bill is sure to be Ross the Boss of Manowar fame. Those lucky enough to grab tickets and make it to the 2016 edition of Keep It True festival can attest to the absolutely electric atmosphere that filled the hall throughout their set. We’re hoping for a repeat this July!

Amongst a vast array of more modern bands – Dimmu Borgir, Amaranthe, Dark Funeral, Korplikaani, Lacuna Coil, Dark Tranquility – are a couple of newer acts solidly paying tribute to those gone before. In the very recent past, we could have expected Motörhead to be blasting away in the Spanish heat, headlining as they had done for so many years. Sadly, we don’t have that privilege anymore. In the absence of three of the loudest, filthiest, fastest and best we’ve ever known, Bömbers and Motörhits will be flying the Motörhead flag high above Barcelona and are not to be missed!

The countdown begins now, we’ll see you there. Don’t forget your sunscreen!


Info and tickets at www.rockfestbarcelona.com/en