Both Bad Touch and Toseland do admirable jobs at getting things on the go tonight. Bad Touch seem completely comfortable opening for such big names. They’ve certainly had a lot of experience in that field and it shows. Toseland are on good form and despite possibly being a little on the heavy side for this line-up, they are going down well with those gathered already. 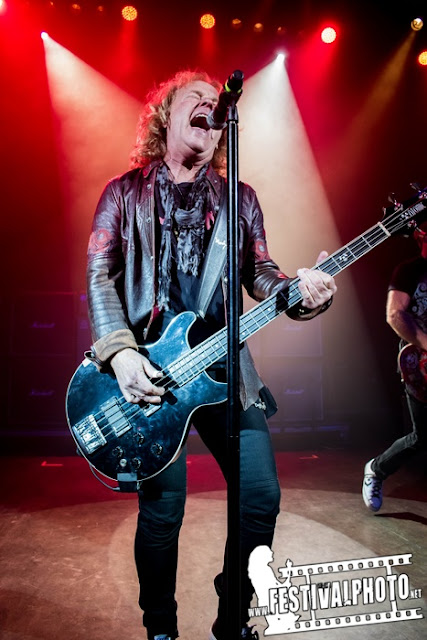 Night Ranger have been given the short straw and are taking the opening slot of this double headliner tonight but the rarity of them playing a show this side of the Atlantic means there’s plenty of fans who couldn’t care less and are simply excited for things to get underway. After a bit of a slow start in the form of new track ‘Somehow Someday’, things really kick off with ‘A Touch of Madness’ and ‘Four in the Morning’ with Brad Gillis squealing away on lead guitar with a huge, climactic solo. The crowd is warming up now and there’s a mass singalong going on which manages to eclipse Jack Blades’ vocals which are almost inaudible due to sound issues. The issue persists into classic ‘Sing Me Away’ where drummer Kelly Keagy’s lead vocals can barely be heard over a muddy, bass-heavy wall of sound. Despite this, the band are giving it their all without having lost any of the swagger and confidence of their earlier days.

‘Coming of Age’, the first of three Damn Yankees songs in this 13 song set, go down a treat with a fantastic reaction from the crowd. Perhaps though, the highlight of the evening comes next in the form of ‘Rumours in the Air’ with Eric Levy’s keys stealing the show. After a tight rendition of their eponymous track with Gillis and Kelli furiously battling it out at the front of the stage, it’s time for things to slow down a bit. The enthusiasm of the crowd, who are lapping up every moment, doesn’t go unnoticed. Blades asks one particularly enamoured fan what age he was in 1985 to which he shouts back “minus 12” sending the band laughing into the beginning of ‘Sentimental Street’, released in that very year. It’s a special moment as Keagy takes the stage alone to sing the intro, getting a chance to show he’s not lost any of his range or power. 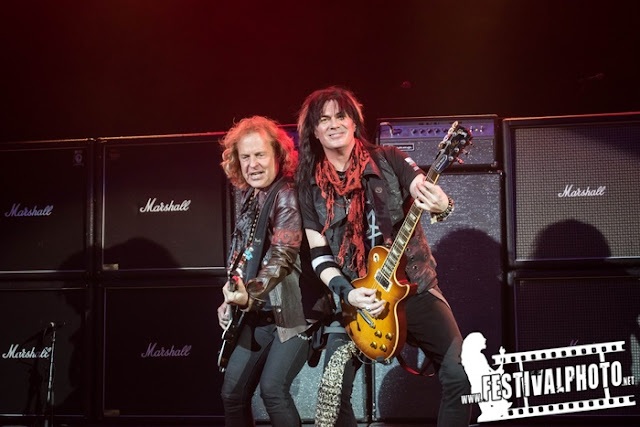 A further two Damn Yankees covers morph straight into a guitar solo-filled ‘Don’t Tell Me You Love Me’ with a snippet of Deep Purple’s ‘Highway Star’ thrown in for good measure. An emotive rendition of 'Sister Christian' prompts a mass swaying, lighter waving sing along and all too soon Night Ranger finish up their time on stage with ‘(You Can Still) Rock in America’ also from 1983’s Midnight Madness. Despite some sound issues, Night Ranger showed tonight that they still have much of the attitude, skill and energy which gained them such attention in their heyday.

From before they’ve even taken the stage, it seems as though Skid Row have been given the better end of the bargain tonight. They have a more expansive stage set up than Night Ranger as well as their own backdrop and as we’ll come to see, none of the sound issues which plagued the preceding act. Although there’s been a small exodus of Night Ranger fans both upstairs to the balconies and out of the venue altogether, the place is still packed out and there’s an atmosphere of anticipation especially as long term fans are curious as to how new addition ZP Theart will take to his vocal duties.

A punchy ‘Slave to the Grind’ gets things off to an energetic start with Theart clearly eager to live up to his predecessor. He is full of bravado and energy and stays pretty true to the original versions of the tracks. The band are completely tuned into each other as they fire out impressively tight versions of ‘Sweet Little Sister’ and ‘Piece Of Me’. Dave Sabo and Scotti Hill really come into their own together during ‘Livin' on a Chain Gang’ and ‘Big Guns’. ’18 and Life’ sets the crowd on fire, the whole room jumping and screaming in unison. It’s as if no time has passed since Skid Row were topping the charts. The edgy and more aggressive ‘Makin’ a Mess’ allows Rachel Bolan and Theart to really let loose on bass and vocals, taking things up a notch.

Bolan gets his time in the limelight as he takes over vocal duties for a fierce cover of The Ramones’ ‘Psycho Therapy’ and does a damn good job of it. ‘Monkey Business’ finishes off the main set with Rob Hammersmith, drummer of eight years showing us what he’s made of, thundering away on the kit. The combination of acoustic ballad ‘I Remember You’ and the anthemic ‘Youth Gone Wild’ brings fans through a range of emotions and allows the band to showcase the whole spectrum of their greatest strengths as musicians and songwriters. The night ends on a high with the entire crowd truly going wild for Skid Row who still clearly have a special place in the hearts of their European fans.