Do You Remember seeing high-energy rockers High Spirits hit the Black Heart stage back in 2013? The venue was near to empty but High Spirits didn't fail to deliver a high-powered set as always. Since then, the Chicago based lads have gained a loyal following and return tonight joined by Züül and Heavy Sentence as they attempt to make this Wednesday night, feel like a Saturday. 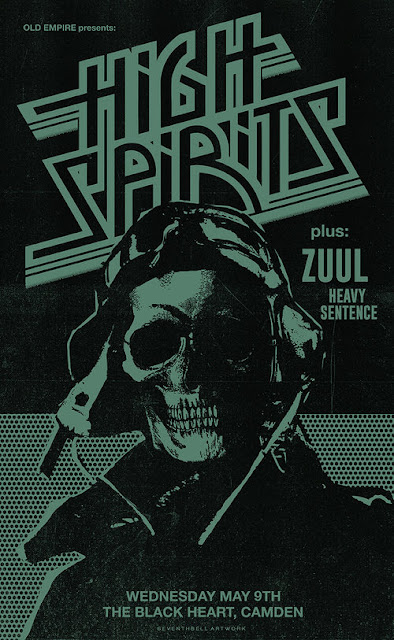 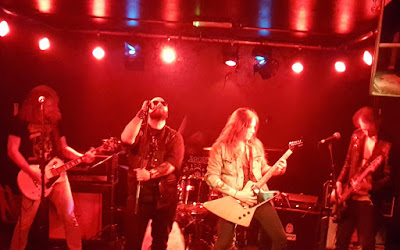 First-up tonight are Manc-metallers Heavy Sentence- a band who I've been eager to catch for some time after hearing nothing but positive reviews. From the first riff, they're already executing lashings of energy as they get the entire room buzzing within minutes - heads nod with approval and to the heavy groove infused riffs. With initial vibes of total Motorhead worship, the band go on to show that they're also more than this as they deliver a tight set packed full of grit with each band member's unique style shining through. Vocals are reminiscent of a cross between Tom G Warrior and Lemmy at his roughest. They work seamlessly with a raw, punk edge and a large handful of killer, classic heavy metal melodies and solos. Heavy Sentence definitely made a fan out of many Londoners tonight; it's thrilling to witness a new band with such energy. Be sure to get your hands on the band's EP Protector/Darkest Hour- you won't be disappointed.

After a short break, the room packs out for Züül. Consisting of 2 members of High Spirits, there's  high hopes. If ever there was a front man to demand attention, it's Brett Battaeu with his smooth, confident vocal and sassy stage presence. He feels every note played tonight and the musicianship and intense connection between each band member is evident. Züül's heavy metal back bone is met with a rough edge through both image and sound. Much like High Spirits their intensity lifts the crowd as classic heavy rock riffs are matched up with a hard, pounding rhythm section. A band you could very much imagine on a grand stage.

The Black Heart has never had such a positive, uplifting vibe as it does for tonight's show and as we wait for Chris Black and his band to take the stage, it's true to say that never has a band been so aptly named as High Spirits.

The moment they step on stage the crowd are quite literally lifted as the atmosphere bounces. It's so great to see a busy room full of pumping fists, banging heads, sing-a-longs and quite strangely- a mini 'mosh pit'. Making their way through a set made up of tracks from across their discography including favourites 'You Make Love Impossible', 'Full Power', 'When the Lights Go Down', 'Another Night In the City' and of course 'High Spirits' ... to name but a few. Chris modestly encourages the crowd to join in with his effortlessly great and instantly recognisable vocals as the band's musicianship and on-stage banter adds to the happy- but not sappy- mood in the room.

High Spirits pull off another night full of authentic, high-powered heavy metal and this time filling up the Black Heart on a Wednesday night - this doesn't go unnoticed by Chris and the rest of the band. High Spirits could play London every week, and I'd still attend, each and every time. 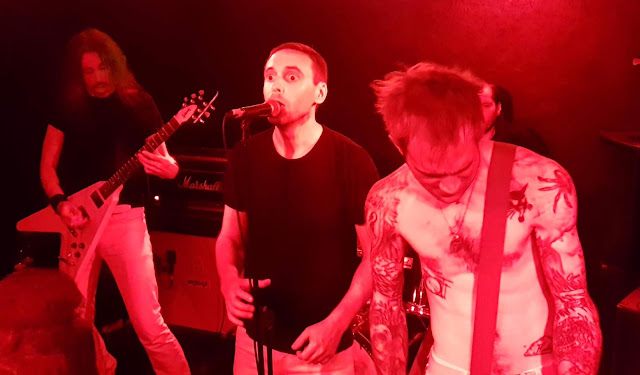