Church of The Cosmic Skull were something of a darkhorse when they emerged in 2016 with their debut album Is Satan Real? Nottingham-based and boasting members of Hellset Orchestra, Dystopian Future Movies, You Slut! and Mammothwing, clothing themselves in a sense of mystique centred on their spiritual principles (The Seven Objects, central to their outlook) and a familiar-but-distinctive heavy 'vintage' rock sound that makes most sense to these ears as an amalgamation of Black Sabbath, Kansas and a gospel choir.  Is Satan Real was a strong release that caught the attention of some of the more mainstream music press. The Church are a solid live band and the question of “what comes next?” is a pertinent one leading into the ‘difficult second album’ which arrived last month in the form of Science Fiction.

The album begins with the title track- a triumphant, vintage-sounding introductory riff leading us through a brief maelstrom of multi-layered vocals and odd time signatures before settling on a piano-and-vocal interlude and then…More. More Black Sabbath-meets-Kansas riff stylings, more harmony, more weirdly utopian sounding lyrics, more everything. There are a lot of ideas packed into these 4 and a half minutes, an impression one returns to a lot with this band’s work.

'Go By The River' is a more straightforward affair, combining a heavy main guitar riff complementing some fancy organ playing, moving from an interesting main riff to guitar lead in the closing section. The Church display the power of repetition here, the lyrics essentially consisting of three (slightly menacing) phrases: “Go by the river, go by the road”; “You run” and “I’ve seen the coming of the storm, I’ve seen the ground beneath you” repeated and filtered throughout the chorus of the song, coming together with the guitar lead at the end.  This adds to the power-through-simplicity appeal of the song.

The Church’s euphoric, utopian vision really comes to the fore with the third track. The overall sentiment of 'Revolution Comes With an Act of Love' is one of determination and hope in the face of a society losing its way but a bit more, y’know, cosmic. Listen along to the final chorus refrain, guitar lead soaring along with beautiful harmonised vocals and not feel at least a bit compelled to bop your head along, I dare you.

'Cold Sweat' adds a bit of pace to the album. The song moves from quiet, muted chords to full, joyous chorus. 'The Others' provides some slow softness with psychedelic musing and an impressive turn from the Church's team of vocalists. 'Timehole' is the album’s most fast-and-furious number, propelled along by a breakneck-speed riff, leads weaving their way around vocal melodies, only really letting up for a smartly applied bit of discord. If this album has a weak point it’s arguably to be found in 'The Cards You’re Playing', a track which feels more like an interlude than anything else and, while allowing for some impressive instrumental and vocal workouts could have done with being half the length. The chord progression in particular feels like it could form a part of something much more substantial.

'Paper Aeroplane & Silver Moon' is a song of real epic scope and competes with 'Revolution' for the high point of the record. Pretty vocal trade-offs backed by the organ in the first two minutes lead into a subsequent four minute trade-off between fast, heavy riff sections and muted lead vocal verses over quiet chords culminating in a chaotic organ solo and heavier instrumental approach to the end. The kind of song that leaves the listener feeling they’ve shared in a journey by the end.

The album closes with 'The Devil Again', which effectively comes off as the 'Cards' formula deployed more effectively. A repetitive main structure with flourishes including a filthy keyboard solo and strong chorus. It at once summarises and closes album in a satisfactory way. This album is a worthy follow-up and provides plenty of individual songs to stand up to the likes of 'Mountain Heart' and 'Movements In The Sky' in terms of quality. This band have already delivered a great deal and appear to be scratching the surface in terms of potential. 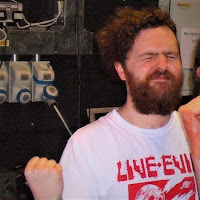