Live Review: Alive and Dangerous at The Underworld, Camden

The boys are back in London again! 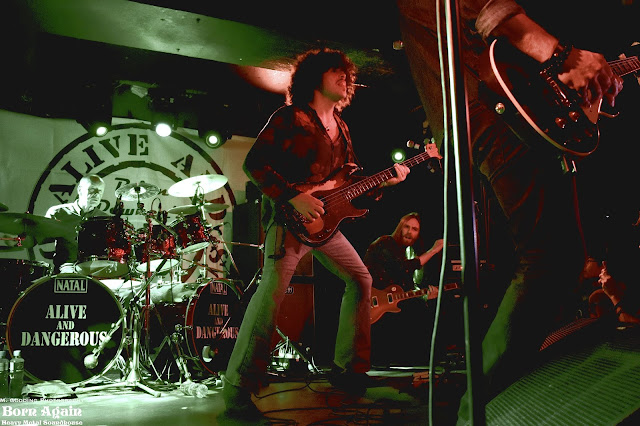 Judging by all the pushing and shoving at the stage of the packed Underworld, it's clear from the get-go that Brian Downey's Alive and Dangerous haven’t lost any of their appeal. It’s the fifth time that they've brought their celebration of the 1978 masterpiece to Thin Lizzy’s London fans whose numbers seem to grow each time.

How perfect a choice Brian Downey has made with his band is clear from the moment they begin to play. We’re treated to not just a faultless run through of Live and Dangerous but a genuine and heartfelt tribute to the music and those behind it. Matt Wilson embodies the spirit of Phil whilst implicitly making it clear he is here to pay tribute rather than to imitate. He doesn’t let us forget the man at the back either, giving plenty of credit where credit is due. Brian draws attention to himself through his drumming alone, showing how little has changed in his musicianship and style since the good old days.

Phil Edgar and Brian Grace bring Lizzy’s twin guitar magic to life again, capturing hearts during ‘Still In Love With You’ and getting the whole room moving to the melodies of ‘Don’t Believe A Word’, ‘Sha La La’ and well, everything else. It’s a joy to watch a band who are truly making the most of what they’re doing - having fun with each other and with some of the best music that the world of hard rock has ever seen.

With ‘Got To Figure Out’ we get something a bit different - a new song, written by Alive and Dangerous this year. There’s a little confusion from the crowd perhaps expecting only to hear songs they’ve heard time and time again. No matter, people are moving to the tune of this modern creation soon enough.

Finally, after a goosebump inducing ‘Black Rose’, we’re sent on our way to the sounds of ‘Whiskey In The Jar’ and promises of a next time we’re already looking forward to.

Check back at www.briandowneysaliveanddangerous.com for added dates in the future.