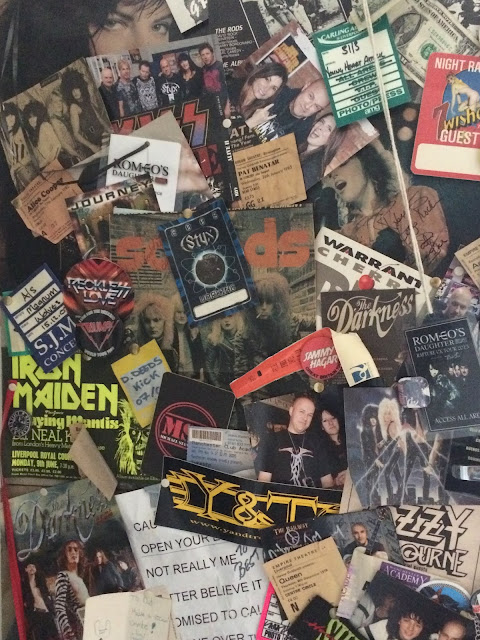 Tell us a bit about you and since when/why you have a passion for collecting vinyl:
Music as a passion started in the seventies with bands like Slade and Sweet and progressed from there. I’d always harboured a desire to be a part of the industry from an early age. From my first gig in ’77 (Black Sabbath at the Liverpool Empire) I was hooked and it just snowballed from there.
Not having an older brother or sister to guide my musical tastes, I relied on magazines like Sounds etc. Also none of my mates liked Metal, so I always felt like a loner. It wasn’t until I met a guy at football, who was in a band, that I felt like I belonged somewhere. I went in the van to all his gigs and suddenly I felt like I fitted in. There’s a scene in Almost Famous where William Miller says to Penny Lane ‘I have to go home’ and she replies, ‘You are home.’ That’s how I felt and it’s took me on a journey of managing bands that never got anywhere, to writing for some of the biggest magazines on the planet like Classic Rock, Planet Rock, Burrn, Rock Candy with all the old Kerrang writers, Powerplay and Fireworks.

To me, music is packed full of memories and emotions.

First vinyl purchase: That would have to be an original copy of Black Sabbath’s ‘Paranoid’ album that I got from a school mate in 1976 for the princely sum of fifty pence. It would prove to be the catalyst for a lifetime of collecting.

Most recent vinyl purchase: The last vinyl purchase from a record shop before the lockdown would have to be IQ’s ‘Nomzamo’ album. The last thing I’ve bought online is Mendes Prey’s ‘On To The Borderline’ 7” single, something I’ve been after for a while at a reasonable price.

Prized possession(s): Isn’t every record a prized possession, memories from various moments in time? I can remember buying certain albums at certain times, yet others I sometimes forget I’ve even got. I’ll say any record from the NWOBHM as it was a movement that I was right at the beginning of. Albums and singles from bands like Raven, Maiden, Saxon, Leppard, Venom, Angel Witch and a whole raft of others are my prized vinyl possessions.

The needle(s) in the haystack (rarest): It would have to be my copy of Iron Maiden’s ‘Soundhouse Tapes’ that I bought back in ’79 for the grand sum of £1.20! It commands anything from £800-£2,000 pounds these days; mine is even signed by Steve Harris, in ’84 if I remember rightly. 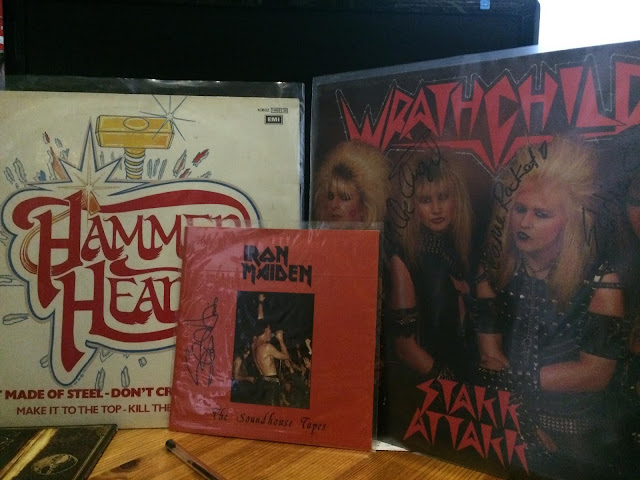 Most featured artist(s) in your collection: Not an artist, but a label. I collect all of the Ebony Records albums from the eighties. The likes of Dealer, Preyer, Grim Reaper, Cobra, Touched, Savage, Chateaux, Blade Runner, Holland, Hammer, Samurai, Tyga Myra, Fast Kutz and Rankelson are all prime slices of metal. I especially love the Ebony records compilations of unknown bands – Metal Plated, Metal Maniaxe, Metallic Storm, Metal Fatigue and Metal Warriors as they contain some wonderful one-off’s from the world of metal. But like everything, they are getting pricier by the day.


1) Wrathchild- ‘Stakk Attakk’. I loved this band in the eighties, followed them all over the country. This is a reminder of great times.
2) Torino- ‘Customised’. The debut album from Liverpool’s Torino is another reminder of wonderful times watching them in the Warrington Lion, Runcorn Cherry Tree or the Kings Arms in Wrexham.
3) Rox-‘Hot Love In The City’. Former Sounds writer and Kerrang! founder, Geoff Barton, loved these boys and so did I and this single is arguably their finest moment.
4) Silverwing-‘Sittin’ Pretty’. Another Barton rave, another wonderful band. This 12” single features ‘Teenage Love Affair’, check it out.
5) Def Leppard-‘High and Dry’. Another band I adored throughout the seventies and eighties. First saw them in a club in Birkenhead in ’79 in front of about forty people. Their second album is by far their best. 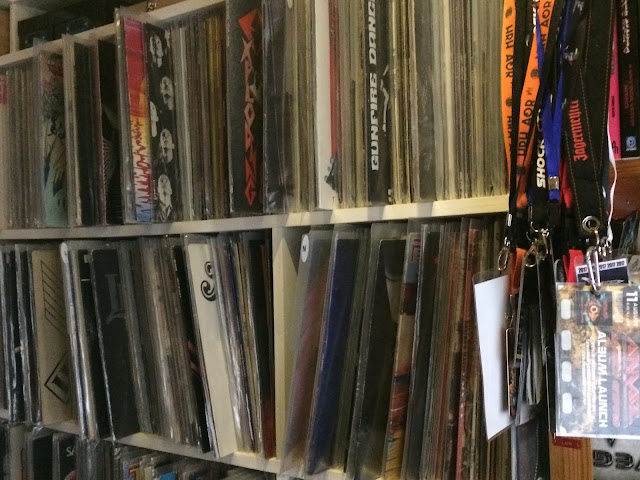 Priciest Piece: The aforementioned Iron Maiden single, Motley Crue’s ‘Too Fast For Love’ on Leathur Records or the Diamond Head white label debut, but you can throw in the likes of Treason, Shock Split, Crucifixion, Wild Pussy, Nemesis, Killerwatt, Urban Clearway, Artisan, Hyper Vyper, Arizona, Darklight and a whole host of other British metal acts that regularly fetch over the £100 mark.

Worthless wonder (not worth many pennies but might mean a lot to you!): My Slade singles from when I was a kid in the seventies, bought for me by my mum and dad. They are battered, but priceless and my first taste of music. I actually met them once backstage at the Birmingham Odeon, Noddy Holder and Don Powell was drinking pints of Whisky; it was intimidating and exhilarating in equal measures.

Most regular place you purchase/trade/search: These days its virtual record stores like Discogs, Ebay or Musicstack that take a lot of my money. We are also lucky to have Grey & Pink records in Chester, one of the finest selections of used vinyl in the whole of the North West of England.

Bargain Bin: I was in a record store in Cambridge when I came across a copy of the Hammer Head (Ian Parry fronted Dutch band) EP, ‘Heart Made Of Steel’, for £5 pounds. But what made it even more of a bargain was the press releases, photos and hand written letters that were tucked inside. It was like a time capsule to the past.

Favourite non-vinyl collectable(s): I’m going to say my magazine collection that includes the first 500 Kerrang’s, Metal Forces, Boulevard Fanzine, AOR Classics Fanzine, Loud Fanzine and Frontiers Fanzine and many others. Or my Journey ‘Live In Houston’ DVD that is signed by Steve Perry after I interviewed him many years ago.

Favourite record shop from the past: The likes of Penny Lane records in Chester would have to be my personal favourite, so many memories attached to that store that includes meeting Lemmy and Motorhead. But out of town I’d always love going to Shades in London for the day, or Lotus records in Hanley, X Records in Bolton and ST records in Dudley. One of the coolest was Yanks/Power Cuts in Manchester. It was a huge deletions warehouse that had Vinyl and CDs by the bucket load for ridiculous prices and their sales were legendary. 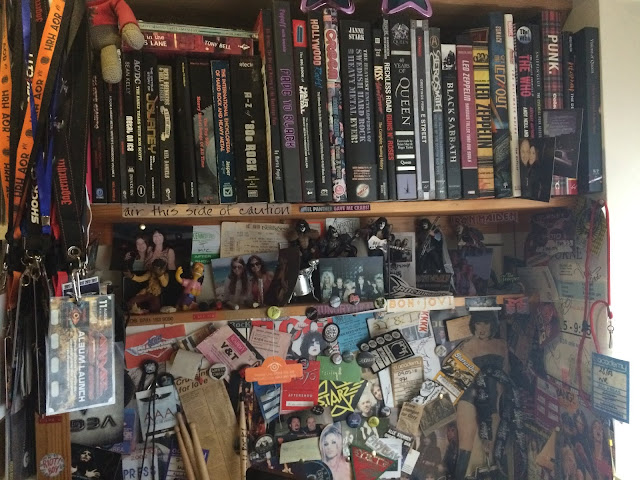 Posted by Born Again- Heavy Metal Soundhouse at 12:33 No comments: 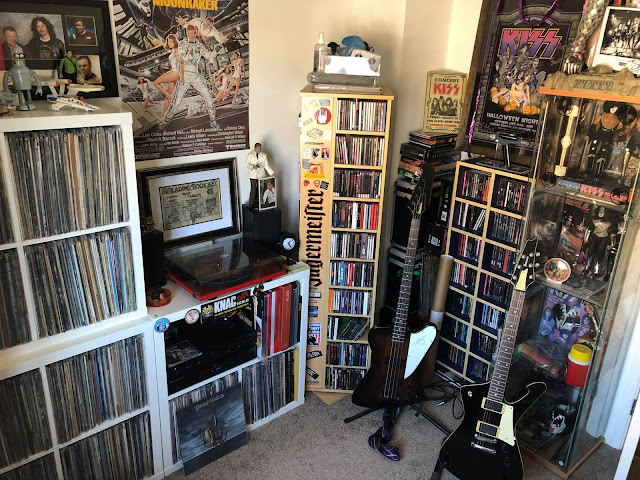 Tell us a bit about you and when/why you have a passion for collecting vinyl:
My dad gave me an old record player when I was about 8 with a stack of singles and albums, everything from The Beatles and T-Rex to the Yardbirds. I fell in love with music from that point and when I joined senior school at 11 I made a friend who was a Status Quo fan, my dad got me some of their albums and along with The Police were my first real bands. I was dedicated too... I collected anything I could find on them.

At this point the NWOBHM started to hit and I embraced bands like Motorhead, Maiden, Vardis, Tygers of Pan Tang etc. Kerrang Magazine helped me to discover AC/DC, Led Zeppelin and of course Kiss. My vinyl addiction began. Junk shops where a great place to discover so many great records, I would sit and stare at the covers imagining what the bands looked like in concert. Then I bought my first gig ticket! Saxon Denim and Leather Tour 1981 with US act Riot in support.


My life changed at that moment... I had found my tribe!

First vinyl purchase:
Via my dad with my pocket money it would be Status Quo - Piledriver/ Hello/ Blue For You.

Most recent vinyl purchase:
Great White - Hooked, with the original withdrawn cover of the naked model.

Prized possession(s): That's a tough one! I would say Kiss- Creatures of the Night signed by the band 1982... I met them at Virgin Megastore and being a huge Kiss fan it was a mind blowing experience.

Most featured artist(s) in your collection: That's easy... it's Kiss! The band only released 20 studio albums and I have about 160. Everything from bootlegs to rare imports! 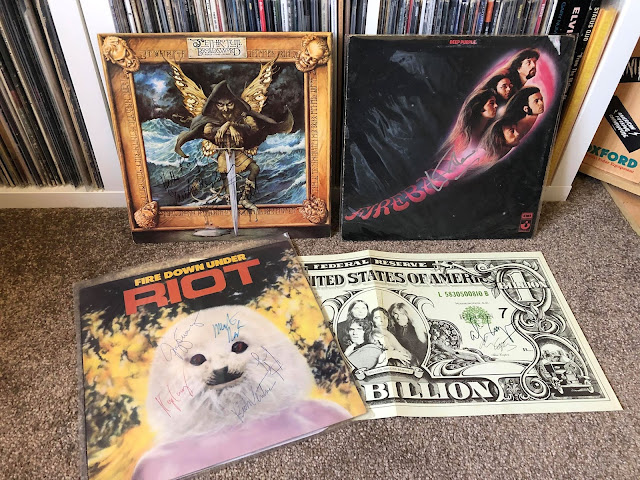 Top 5 favourites: Mostly vinyl. It means even more to me when it is signed and it almost becomes infused with the memory of meeting that artist so here they are: -
1) Kiss - Creatures of the Night
2) Riot - Fire Down Under (officially the first rock band I ever saw live and met too).
3) Jethro Tull -Broadsword and The Beast (I interviewed Ian with a 30 min time slot, we had a delightful conversation that lasted close to an hour.)
4) Deep Purple- Fireball (original 1st issue with insert signed By Ian Gillan during his period with Sabbath.)
5) Alice Cooper - Billion Dollar Babies (fold out poster billion dollar baby bill signed by Alice himself.) 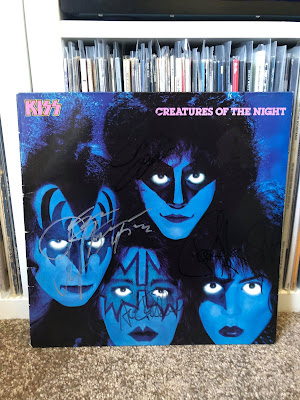 
Worthless wonder (not worth many pennies but might mean a lot to you!):


Electric Light Orchestra - Out Of The Blue blue vinyl with poster and fold out card board spaceship, a truly glorious sounding and looking vinyl that quite easy to pick up at a good price.

Guilty pleasures: The Beach Boys. I have every album from the early sixties to present day on original label issues.

Most regular place you purchase/trade/search: It used to be Shades Record Shop in London in the '80s. It was the only dedicated metal rock shop of its day! These days it's car boots and Ebay.


Bargain Bin: The Beatles- Rubber Soul and Help £1 each at a car boot sale.

Favourite non-vinyl collectable(s): That would be my Kiss '70s merchandise collection, everything from dolls and lunch boxes to radios and Halloween costumes. 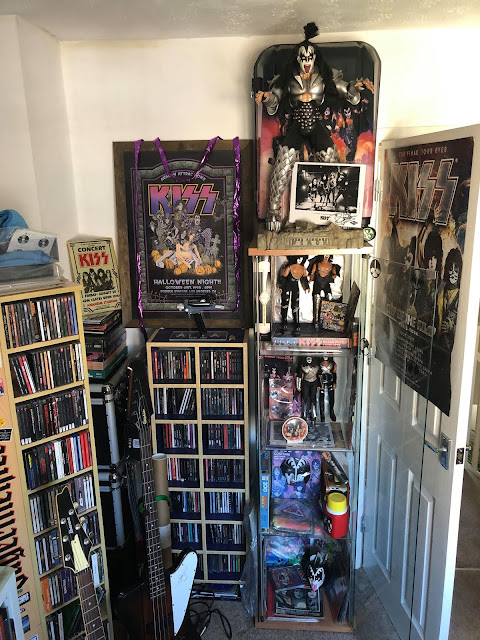 Posted by Born Again- Heavy Metal Soundhouse at 20:29 No comments:

The website is on a hiatus whilst we work on updating it! 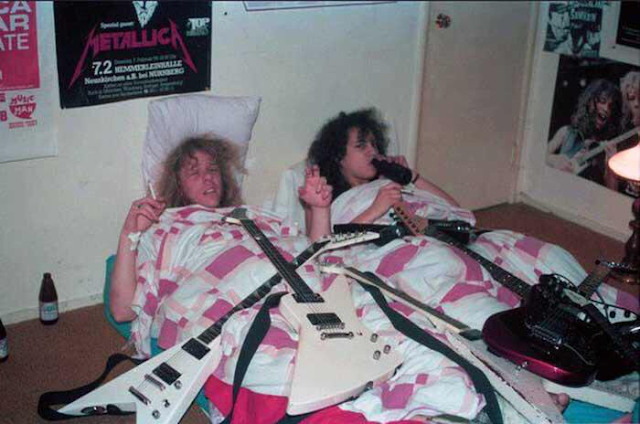 Posted by Born Again- Heavy Metal Soundhouse at 13:26 No comments: